The Temerty Contemporary Ukraine Program (TCUP) is a bridge between the scholarly and policy communities with the goal of promoting a deeper understanding of Ukraine in the world. The TCUP conference’s second panel, “Digital Transformations,” moderated by Bucerius fellow Tetyana Lokot*, addressed the question of how the internet influences sovereignty in the twenty-first century. The panel drew together experts on media studies, as well as journalists and a practitioner working in digital governance, to examine the question of digital sovereignty from multiple angles.

The panel was made up by Olga Boichak (University of Sydney), Nataliya Gumenyuk (The Public Interest Journalism Lab), Anna Bulakh (Reface) and Peter Pomerantsev (John Hopkins University). The panelists discussed the role of digital technology in Ukraine’s democratic transformations since 1991 and pointed out the recurring mass protests in Ukraine in the 2000s. The panel debated the concept of “digital sovereignty” or “technological sovereignty”—a term often used in the Russian and Chinese contexts that points to increased state control and limits over the use of technology. Lokot also turned to the problem of “hybrid” warfare, which refers to "a blurring of the distinction between the physical and digital battlegrounds", as Olga Boichak pints out.

"In Ukraine, there are further blurred distinctions, such as between military and civilian, public and private, and witness and weapons—the weaponization of eyewitness reports and testimony. This hybridity makes it difficult to assess causes and effects, but at the same time, it is an opportunity to build new social infrastructures to address this kind of warfare."

The open discussion turned toward the issue of media literacy and its meaning. You can find a complete summary of the panel here.

*Tetyana Lokot is a Bucerius Ph.D. Fellow and an Associate Professor in Digital Media and Society at the School of Communications, Dublin City University. She researches threats to digital rights, networked authoritarianism, internet freedom, and internet governance in Eastern Europe. She is the author of Beyond the Protest Square: Digital Media and Augmented Dissent (Rowman & Littlefield, 2021), an in-depth study of protest and digital media in Ukraine and Russia. Her research has been published in Information, Communication & Society; Social Media + Society; Digital Journalism; Surveillance & Society; Communication and Critical/Cultural Studies; Misinformation Review and Irish Studies in International Affairs. She has presented her research at multiple international conferences and her writing has appeared in The Guardian, The Washington Post and The Moscow Times. Lokot holds a PhD from the Philip Merrill College of Journalism, University of Maryland. Previously, she was Assistant Professor at the Mohyla School of Journalism (NaUKMA, Kyiv, Ukraine) 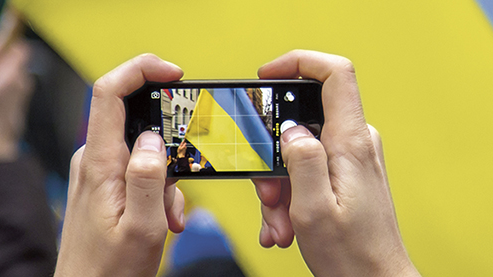